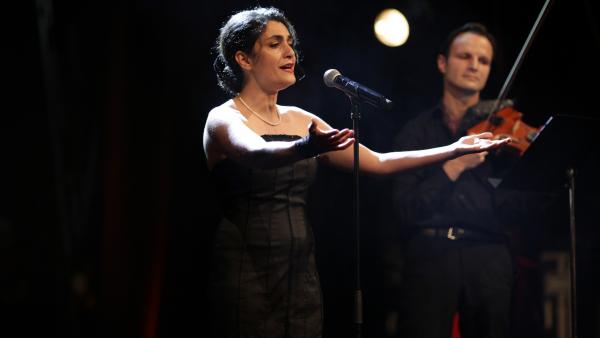 Darya Dadvar was the first Iranian woman to perform on stage as a soloist in Iran, 24 years after the Islamic revolution. She loves her country but has made Paris her home. Blessed with a silky soprano voice, she moves effortlessly from Iranian folk to Autumn Leaves, My Fair Lady and Bizet’s Habanera. RFI caught up with her after a recent benefit concert in Paris in support of the Maison des Femmes (Women’s house) which cares for victims of sexual violence.

Davdar sits casually on a bench in the corridor post-concert, still dressed in a strapless long black taffeta dress. We’re regularly interrupted by a flurry of women who come and thank her.

“Magnificent, so moving” says one elderly woman, her voice trembling. Davdar touches her chest in recognition.

“This song is one of my favourites,” she says. “It’s a man talking to a woman saying ‘You have beautiful dark eyes, you have such a power on me that I sometimes feel you are in competition with God. And in such a bad world with so much war and injustice, I’m just happy looking at you, being with you. How is it possible with these deep beautiful dark eyes that you don’t see that?’ ”

The song, by the late Iranian composer Bijan Mofid, is one of many folk songs she grew up with.

“My mother was a singer and after the revolution, when it was forbidden to sing, we were continuing to sing at home,” she says, her own dark eyes sparkling.

She watched a lot of movies, especially musicals like My Fair Lady and The Sound of Music, which had been very well translated into Persian.

“I was singing all the songs in Persian and then I asked to watch the original in English. Then I was mixing it all the time. In parties, with my family, I was just like a cassette. My mother said ‘Darya sing it in English, now sing it in Persian’.”

Davdar left Iran in 1991 and moved to France where she spent eight years studying music at the conservatory.

In 2003 she sang in Tehran with the Armenian Philharmonic Orchestra directed by the Armenian-Iranian conductor Loris Tjeknavorian. The first Iranian female soloist to perform there since the Islamic revolution, she believed it was the beginning of a new era.

“I thought doors are opening, but after that everything closed again. It became even worse,” she says.

When Hassan Rohani was elected president in 2013 Dadvar once again thought the situation for women singers would change.

“I thought Iran is opening the doors to foreigners, to tourism, they’re signing [deals], they’re coming out of these miserable closed frontiers and now I hear again that girls cannot do cycling,” she sighs. “I don’t know what it is, because they’re listening to all these women’s voices and they listen to my voice and then they say ‘no she can’t sing’ [in public].”

While Davdar is frustrated at the situation for female singers in Iran, she believes it will ultimately change, partly thanks to the social media and internet revolution. In the meantime she’s built up a large fan base here in Europe, drawn to her classical arrangements of Iranian folk music and the way she blends opera, jazz and even blues.

“I began as an opera singer,” she says, “but now I consider myself just a singer because I use the technique of opera to pass [on] a message.”

She says she simply wants to bring people together.

“When you are in my concert you don’t feel the difference between languages, it’s just a feeling that’s being communicated.”

Persian, French, English or German “is just the surface” she says, and what’s important is underneath. “We’re all people, we all have pain, we fall in love, we’re all the same.”